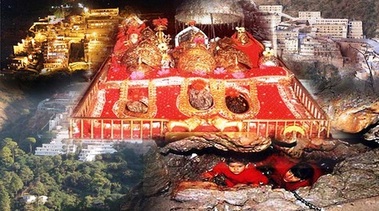 As the legend goes, more than 700 years ago Vaishno Devi a devotee of Lord Vishnu, used to pray to Lord Rama and had taken vow of celibacy. Bhairon Nath, a tantric (demon-God) tried to behold Her. Making use of his tantric powers, Bhairon Nath was able to see Her going towards the Trikuta mountains and gave chase. It took Bhairon Nath nine months to locate Her, the reason why the cave is known as Garbh Joon. Mata Vaishno Devi blasted an opening at the other end of the cave with Her Trident when the demon-God located her.On arriving at the Holy Cave at Darbar, she assumed the form of Maha Kali and cut off Bhairon Nath head which was flung up the mountain by the force of the blow and fell at the place where the Bhairon Temple is now located. The boulder at the mouth of the Holy Cave according to the legend is the petrified torso of Bhairo Nath who was granted divine forgiveness by the benevolent Mata in his dying moments.

The journey amidst snow capped mountains and sprawling forests arise from within the holy shrine of Mata Vaishno Devi. There is a common faith among the folk that Goddess-Vaishno sends a 'Call' to her devotees and that once a person receives it, wherever he or she is, marches towards the holy shrine of the great Goddess. A supernatural power seems to draw them through the mountain and they climb up those great heights step by step, chanting 'Prem se bolo, Jai Mata Di '. There are images of three deities - The Mahakali, Maa Saraswati and Maha Lakshmi.

In his dying moments, Bhairav pleaded for forgiveness. The Goddess knew that Bhairavi's main intention in attacking her was to achieve salvation. She not only granted Bhairav liberation from the cycle of reincarnation, but also granted him a boon, whereby every devotee, in order to ensure completion of the pilgrimage, had to visit Bhairavnath temple near the Holy cave after the darshan of the Goddess.Meanwhile Vaishno Devi assumed the shape of a rock with three pindis (heads) and immersed herself into meditation forever.

The shrine is at an altitude of 5200 feet and a distance of approximately 14 kilometres (8.4 miles) from Katra. Approximately 8 million pilgrims (yatris) visit the temple every year and it is the second most visited religious shrine in India, after Tirumala Venkateswara Temple. The Shri Mata Vaishno Devi Shrine Board maintains the shrine. A rail link from Udhampur to Katra is being built to facilitate pilgrimage. The nearest airport is Jammu Airport which has very high flight frequency. All leading domestic airlines have their services to Jammu Airport.

Customized Itinerary Planning for all destinations in India

Sometimes you want to plan a trip to your own liking as according to your schedule & time as against taking a set group package tour, which leaves on fixed dates. We handle the nitty gritty of planning such a trip complete with hotel bookings, car rentals, air/rail bookings, airport/train transfers & what not. Just let us know the destination you would like to visit & we will take the hassles out from planning & executing such a fun trip.